Investors stepped up their target-date contributions in 2022. Net flows into target-date mutual funds totaled about $32.3 billion during the calendar year, a nearly 35% jump from the $24.0 billion they collected in 2021. Although net flows didn’t reach the heights achieved before 2020, the uptick is promising. Exhibit 1 shows the annual net flows into target-date mutual funds since 2017, when net contributions peaked at $69.9 billion. 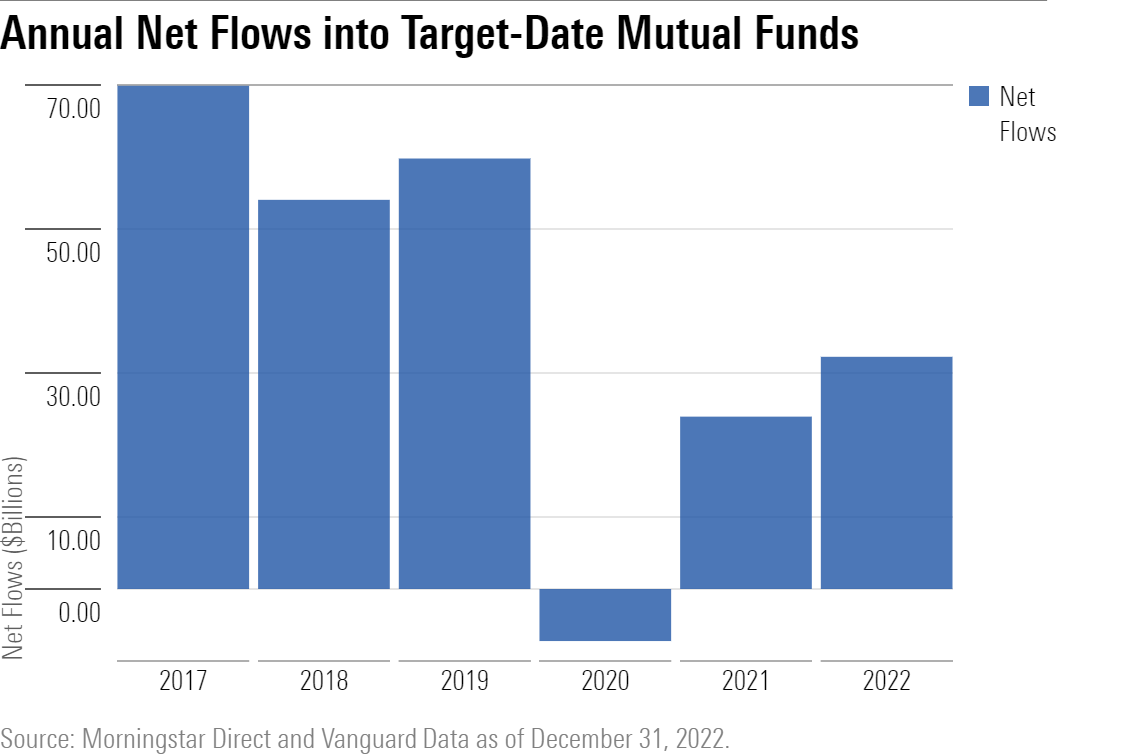 Target-date mutual fund flows’ inability to reach their historic highs can be partly attributed to the rising popularity of collective investment trusts. Target-date CITs are only available through defined-contribution plans but have managed to gain market share primarily because of fees. These offerings typically cost less than their mutual fund counterparts, and some providers are willing to negotiate fees even lower. In recent years, the industry’s increasing emphasis on costs has helped further propel CIT growth. At the end of 2021, about 45% of target-date assets were in CITs, up from less than 20% in 2014. Their footprint has significantly grown year to year as they take in the lion’s share of the net inflows. In 2021, CITs accounted for 86% of target-date strategy net inflows. Assets and flows into CITs are voluntarily reported, and usually on a lag compared with the more regulated mutual funds. So, year-end CIT data for the target-date universe is not yet available.

American Funds Target Date Retirement was the mutual fund series to rake in the most flows in 2022, dethroning the Fidelity Freedom Index series after its consecutive years at the top. Despite index-based target-date series largely dominating in net inflows, American Funds stands as an exception as it exclusively holds actively managed underlying funds. The year also saw a rise in blend series, the middle-of-the-road option that includes active and passive underlying funds. Three blend series made the top-10 list, up from two in 2021.

American Funds Target Date Retirement, which earns a Morningstar Analyst Rating of Gold for its cheapest share class, is one of the few target-date series with all active underlying funds that continues to experience strong net inflows to their mutual fund product. In fact, it is the only such series in the top 10. As other active-based series struggle to maintain consistent net inflows, American Funds’ competitive price tag and strong performance add to its allure. Over the past 10 years through December 2022, the series, on average, delivered higher returns than roughly 99% of peers.

Silver-rated Fidelity Freedom Index fell to the number-two slot after earning the largest net inflows in 2020 and 2021. Part of this series’ appeal draws from its price tag, which is one of the lowest in the industry. Index-based series tend to be less expensive than their active-based peers, which drives the inflows. Six of the top 10 series were index-based, demonstrating their prominence in the target-date space. Impressively, Fidelity Freedom Blend series also made the top-10 list with $1.8 billion in inflows, marking the fourth year in a row that two of Fidelity’s series made the list. However, Fidelity’s flagship series, Fidelity Freedom, experienced $9.6 billion in net outflows, the most outflows of any target-date mutual fund series in 2022.