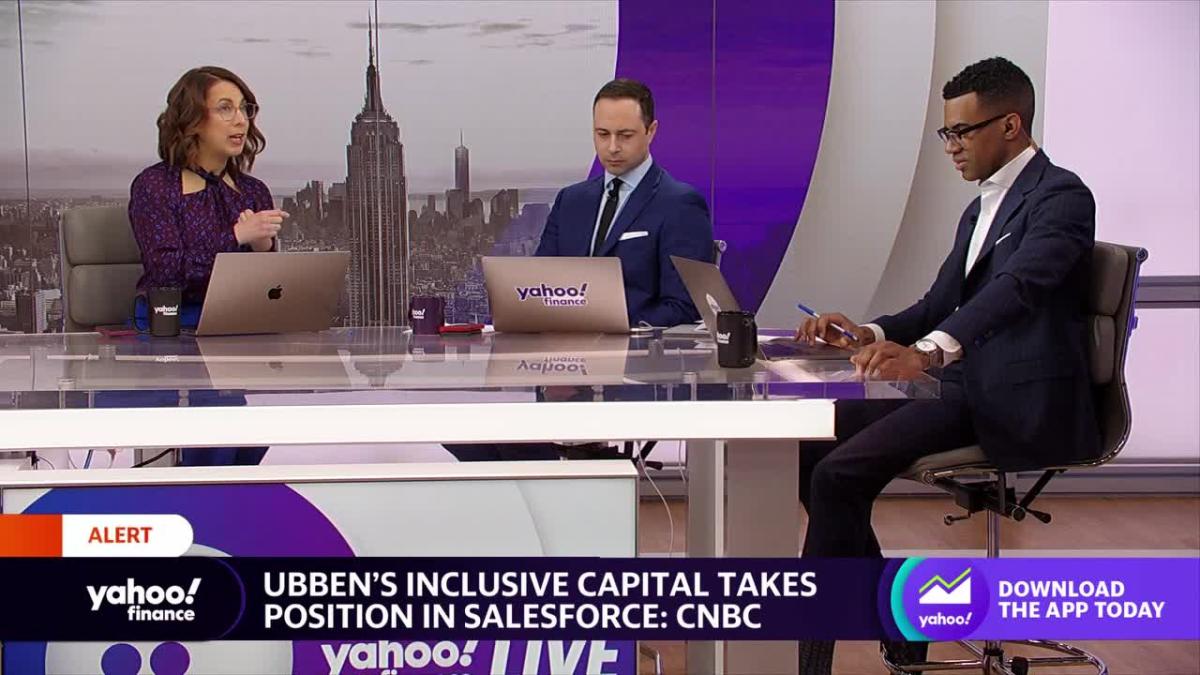 JULIE HYMAN: And we have a little more news on Salesforce now. Jeff Ubben’s Inclusive Capital has reportedly also– also– taken a stake in the company– that’s according to CNBC– becoming the latest activist investor to show interest in the software giant. So let’s keep track of this now.

BRIAN SOZZI: A couple quick observations. I’ve never seen a situation like this, where arguably the three biggest names in active investing are now involved in the company. So that’s first.

Now, also, this also comes for a Dow component in Salesforce, which is also remarkable. Now, a source told me this morning that Elliott is not working with Starboard. But you do have to wonder, do all three of these companies unite and push for some even more major change?

But again, this is serious stuff for Salesforce. They did not return my request for comment. They have not really come out publicly with any statement. But they might have to start getting on the offense, at least in the public domain.

– Yeah, and it’s just a question of what type of either passive or active role each of these different activists would try to play within Salesforce, whether it comes down to trying to get a board seat to have influence at the very top and have the ear of Marc Benioff or of the executives directly, the C-suite.

Or additionally, just saying, you know what? We, in Starboard’s case, just want to see you make sure that any acquisition that does go forward in this acquire-to-grow strategy that has been a staple of so many ERP or SaaS companies– and for Salesforce, that has been a dominant player disrupting CRM for years– for any acquisition that might come forward, just being able to kind of kick the tires on it and have some type of say before it goes through.

BRIAN SOZZI: Yeah, the board could be really in play. A source also told me that Elliott may push for a board seat. Now, Ubben gained a board seat in Exxon. So you might now be looking at a situation where Salesforce might have– may be looking at a major refresh of its board.

If you just go pull up who is on their board, you have the a founding member, a family member of Hasbro, Alan Hassenfeld, who’s been on the board at Salesforce since 2003. So there are a couple people on that Salesforce board that could be well past their expiry date. Let’s put it that way.

JULIE HYMAN: Well, because that’s really the question, right? If these three guys are pushing for common cause at Salesforce, it’s still hard to imagine that they would all agree on one board representative between the three of them. So does that mean that three seats on this board are going to be pushed for by these three different activists?

BRIAN SOZZI: The two logical choices would be Jeff Ubben himself, which is– now he’s now on that Exxon board. A big climate change guy. And Salesforce, of course, has led the charge in a lot of climate-focused initiatives.

And of course Jesse Cohn over at Elliott, he was put, I believe, on the Twitter board when they took that position– when Elliott took that position and pushed for a lot of change over at Twitter, as well. Ultimately the ouster of Jack Dorsey.

You take a look back at November of 2021, which was the last tie for this company. Coming off of that, I think a lot of the activist campaigns or activist investors that have taken large positions at this point, they’re just looking at a stock that is so depressed in price, and just charting an opportunity for themselves to have a proper entry point, as well.