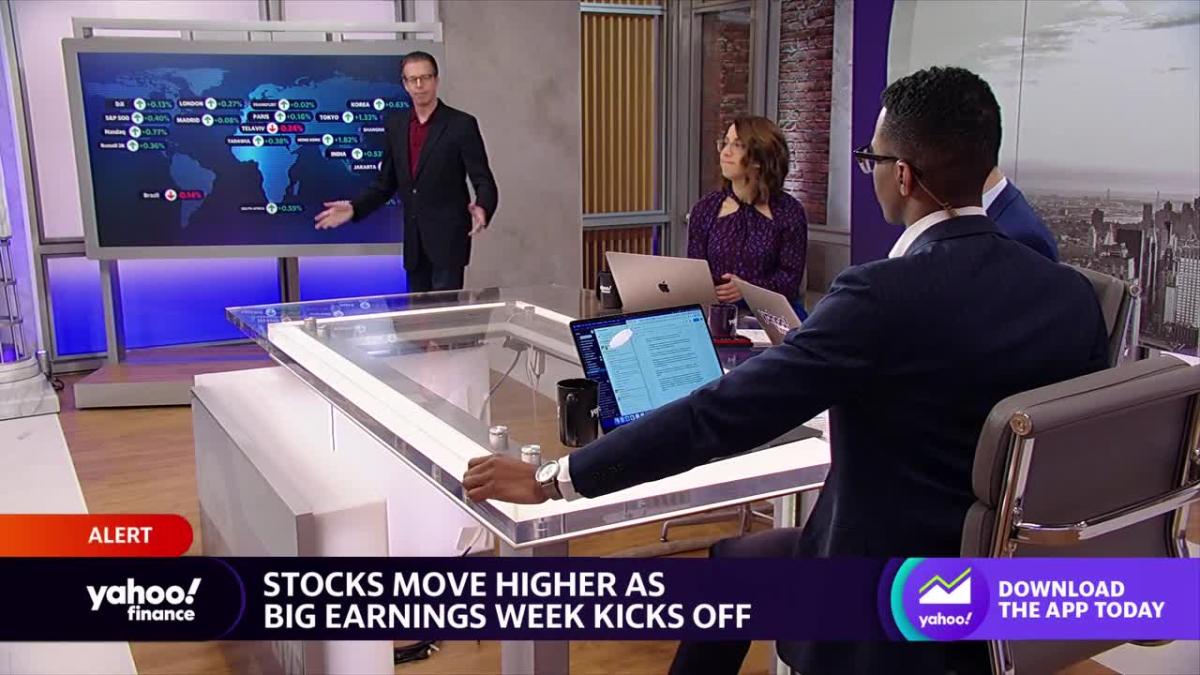 BRAD SMITH: Welcome back to “Yahoo Finance Live.” This morning, major averages in positive territory early in today’s session. We’re 7 min– 17 minutes into trade. Let’s get on over to Yahoo Finance’s Jared Blikre over at the YFi Interactive. Hey, Jared.

JARED BLIKRE: Hey there. Nice to see some green. And I am noticing something that is different this year than it was the year before. That is the NASDAQ is tending to lead more than the Dow. And you can see, the Dow is up only about 13 basis points and NASDAQ up about 8/10 of a percent. Overall, lots of green around the world.

Let’s take a look inside one of the major indices here. This is the Dow. This is going to be over the last year. And what I want people to notice is the Dow currently is in the upper end of its trading range.

Now, you take a look at the NASDAQ, and it’s kind of the opposite. It’s all the way down here. But it has been picking up steam since the beginning of the year and leading on a relative basis. So we’ll have to see if that continues here.

I want to check out the sector action. And par for core– par for the course with the NASDAQ 100, the tech-heavy index getting most of the gains. Guess what? Techs, XLK, in the number one spot. Followed by communications services, energy, and consumer discretionary. Three out of these four sectors– not energy– are the leading sectors– or are the leading sectors inside the NASDAQ.

And here we see Apple up over 1%. Tesla up 2%. And just taking a look at some of our leaders here, do we see some money going into the fringe markets? Well, number one up there is MJ. Only up about 2 and 1/2%. But weed stocks definitely qualify.

BITO, that is a Bitcoin ETF. We’re gonna take a look at that in a second. SOX, that’s chip stocks. XRT, retail. ARKK, gambling. So we are seeing some money spread around some of the fringier sectors.

Now, I want to take a look at crypto. Nothing fringier than that, right? And I say that in a loving way. Bitcoin down about 4/10 over the last 24 hours. But I want to show you what’s been happening over the last year.

Here we see Bitcoin has been mired in the lower end of its trading range. But it has managed this nice breakout since the beginning of January. That breakout is good for, what is that, 37%. Pretty nice there. I want to show you, that is the biggest jump up we have seen since about a year ago.

And there’s a big tendency of people who are holding something they’ve that’s been losing money for a while to, what, get out at break even. As soon as it gets in the green for one penny, a lot of people tend to sell. That’s why anchored VWAP works. That’s why we talk about price memory. So a long way to go. But end of the story, this is a good start.