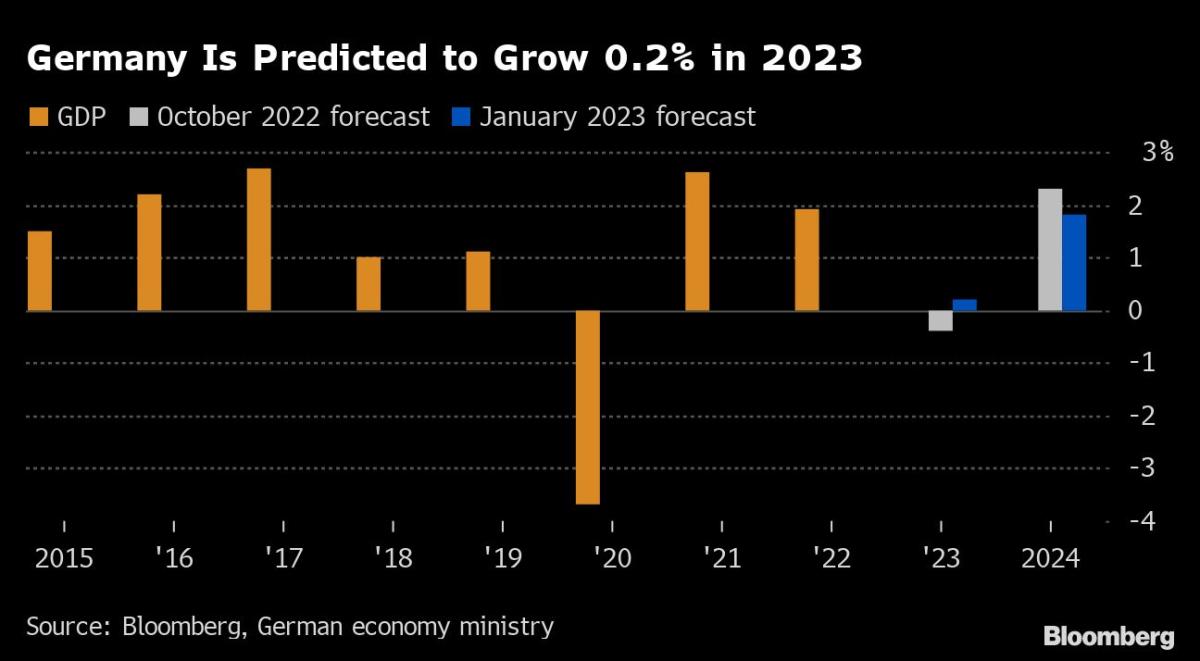 (Bloomberg) — The German government expects Europe’s biggest economy to grow by 0.2% this year instead of the 0.4% contraction it predicted in October, according to people familiar with new forecasts to be published Wednesday.

Most Read from Bloomberg

The government downgraded its growth forecast for next year to 1.8% from 2.3%, according to the people, who asked not to be identified ahead of official publication.

Economy Minister Robert Habeck is due to present the updated forecasts at a news conference on Wednesday at 2:15 p.m. in Berlin. He’ll be joined for the first time by Elga Bartsch, a former BlackRock Inc. and Morgan Stanley economist who was appointed this month to head the ministry’s economic policy department.

Chancellor Olaf Scholz told Bloomberg last week in an interview that he was sure Germany would escape recession this year despite the energy crunch triggered by Russia’s invasion of Ukraine. Diversifying gas supplies had been critical in helping to keep the economy running, he said.

Germany is starting 2023 with brighter prospects than could have been expected just a few weeks ago. This is in no small part due to unusually warm weather, which helped cut natural-gas consumption and all but eliminated the risk of disruptive shortages over the winter.

The new economic forecasts come just days before the International Monetary Fund updates its own predictions. Back in October it said Germany would contract 0.3% this year, worse than any other euro-area country.

The Federal Statistics Office said this month that the economy probably stagnated in the final quarter of 2022, defying analyst expectations for a contraction. For the year as a whole, GDP increased by 1.9% — down from 2.6% in 2021 and just ahead of the 1.8% estimate in a Bloomberg survey.

–With assistance from Michael Nienaber.

Most Read from Bloomberg Businessweek