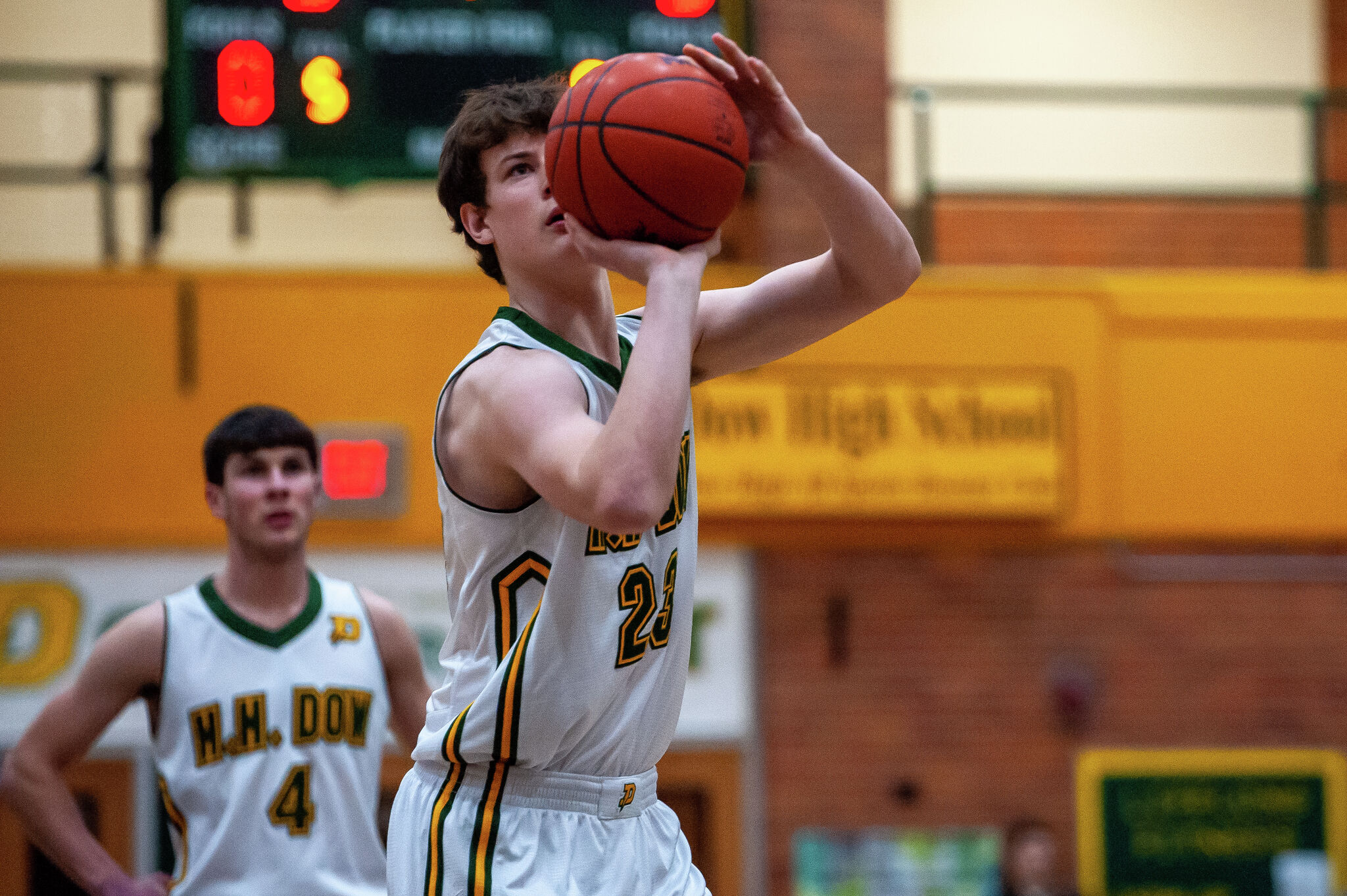 The Chargers jumped out to a 7-2 lead before the Bobcats came back to take a 15-9 edge by the end of the first quarter. Grand Blanc outscored Dow 15-14 in the second quarter to carry a 30-23 edge into the break.

The Bobcats then took control in the third quarter, outscoring Dow 18-8 to open up a 48-31 margin, before going on to outscore the Chargers 35-15 in the fourth.

CHEMICS STORM BACK BUT LOSE BY TWO TO MOUNT PLEASANT

The Oilers led 10-5 after the first quarter and extended to a 22-11 halftime lead before the Chemics stormed back. Midland outscored Mount Pleasant 18-15 in the third quarter to trim the deficit to 37-29, then had a 20-14 advantage in the fourth for the final margin.

The Chemics had a one-point lead late the fourth quarter before the Oilers answered with a 3-pointer to regain the lead for good.

BCW led 14-6 after the first quarter and 23-16 at halftime before the Lumberjacks eventually took a 35-32 lead with 4:35 remaining in the game. Olivia Jatczak responded for Western with a 3-point play to tie it and a layup to give the Warriors a 37-35 edge, and BCW hit some free throws and got some stops down the stretch to hang on.

“I’m very proud of our team and how we handled things down the stretch with composure and confidence,” said Western coach Dan Snover.

Western (12-1 overall, 6-0 SVL) will head to Flint Carman-Ainsworth on Friday for a key Valley matchup.

Mount Pleasant outscored Midland High in every quarter Tuesday in a 53-26 victory over the Chemics in Saginaw Valley League girls’ basketball.

The Oilers led 14-6 after one quarter and extended to a 25-14 halftime lead before outscoring Midland 11-8 in the third quarter and 17-4 in the fourth.

“As a team, we struggled tonight, but we had some shining moments during the game,” said Midland coach Ashton Finney. “Our senior, Bella Sullivan, had her best game to date. She’s a workhorse for us. … She has turned into a defender who can stop the ball heading to the basket. … She truly showed her leadership tonight.”

Maddy Miller and Nevaeh Chaffee both had a big game Tuesday in leading Coleman to a 48-19 win over Ashley in Mid-State Activities Conference girls’ basketball.

The Comets led 12-5 after one quarter and extended to a 23-11 halftime advantage. Coleman then outscored the Bears 15-2 in the third quarter and 10-6 in the fourth.

“It was nice to get back on the winning track,” said Coleman coach Nick Katzinger. “We need to continue with this (momentum) and finish the second half of the season strong going into districts.”

The Comets improve to 4-9 overall.

Calvary Baptist Academy throttled Whittemore-Prescott 51-9 in girls’ basketball on Tuesday to improve to 11-3.

The Kings led 17-1 after one quarter and 28-7 at halftime before outscoring the Cardinals 17-2 in the third quarter and 6-0 in the fourth.

“This is our second game in a row that started with outstanding defense paired with efficient scoring,” said CBA coach Mark Dickerson. “After outscoring Whittemore-Prescott 17-1 in the first quarter, we were able to start rotating players and working on things at both ends of the court.”

The Kings will head to Rochester Hills Christian on Thursday.

“We had a pretty good effort tonight, and it was nice to see Al Pahl get rewarded for his hard work this year,” said Beaverton co-coach Shad Woodruff. “We work every day to have the guys take their best shot, so it is good to see improvement in that aspect.”

Nate Niederquell had nine points for the Falcons, while Wilson Huckeby added seven.

The Falcons (7-6 overall, 4-3 TVC East) will host Bridgeport on Friday.

The Falcons led 15-10 after the first quarter, then outscored the Bobcats 27-10 in the second to open up a 42-20 halftime lead. Freeland outscored John Glenn 7-6 in the third quarter and 7-5 in the fourth.

Karie Keefer led the Falcons with 20 points and five assists, while Lauren LaFond had 15 points and nine rebounds, and Haven Vasold added 14 points.

Carrollton rode a second-quarter surge to a 57-50 win over Gladwin in nonconference boys’ basketball on Tuesday.

“We did some really good things early on, but we had a really bad stretch to close out the first half defensively,” said Gladwin coach Mike Verellen. “We made a lot of mental mistakes and missed a number of layups that would have probably made the difference in a seven-point game.”

Gladwin (5-6) will head to Meridian on Friday.

Saginaw Valley Lutheran pulled away in the second half Tuesday to beat Beaverton 64-32 in nonconference girls’ basketball.

“We played a very good first half. We limited our turnovers, and we were competing,” said Beaverton coach Jason Hubble.

Beaverton (4-10) will host Farwell on Friday.

Jared DeVrieze led the Comets with 20 points, while Trenton Risdon had 18 points, and Logan Dudley and Logan Glazier each added six.

“This was a tough one to let slip away. We got outrebounded and outhustled for a majority of the game,” said Coleman coach Christian Maloney. “We tell our guys all the time that the two most important stats are rebounds and turnovers. If we win both of those, we will be in good shape.

“We are still working on coming out of the gates with intensity. It has been a struggle of ours, not coming out ready to play in the first (quarter),” he added.